Proxy advisor Institutional Shareholder Services (ISS) published its 2023 Proxy Voting Guidelines, which include its benchmark policy changes with respect to U.S. executive compensation. The 2023 policy updates will become effective for meetings on or after February 1, 2023.

While ISS has rewritten its description of “problematic pay practices,” most of the changes are not substantive policy revisions but, rather, a codification of ISS’ current approach.

The description of problematic pay practices has also been adjusted to clarify that such practices are not limited by the phrase “non-performance-based pay elements.” As such, practices can include performance-based pay elements that ISS deems to be problematic. The use of these practices may lead ISS to issue an adverse say-on-pay vote recommendation. The update also makes clear that the list provided in the benchmark policy – which includes liberal change in control provisions with single trigger benefits, extraordinary perquisites or tax gross-ups, and repricing stock options – is not exhaustive.

Additional detail on the list of problematic pay practices is provided in the U.S. Compensation Policies FAQ.

While there are no changes to the three primary screens (RDA, MOM and PTA) for 2023, there are updates to the methodology for the Financial Performance Assessment “FPA” measure as well as the "Eligible for FPA Adjustment" thresholds.

Specific details regarding the changes to the FPA measure for 2023 will be provided in an update to ISS' Pay-for-Performance Mechanics white paper, which will be published in January. According to ISS' back-testing, slightly less than 10% of all companies subject to the quantitative screen will have their overall quantitative concern level modified by the FPA.

In a new FAQ for this year, ISS noted that the presence of inducement and/or make-whole awards may mitigate concerns regarding pay magnitude if a review of the award structure and disclosure reveals positive features. ISS also expects pay levels to normalize following the CEO transition in situations where compensation is elevated in the transition year.

Inducement awards should be predominantly performance-based and structured with appropriate “shareholder-friendly guardrails” and ISS notes the limitations on award vesting in the event of a termination as a desired “shareholder-friendly” feature. ISS requests clear disclosure in this area, including how a company determined the size and structure of inducement awards to be in shareholders' best interests; a statement that acknowledges make-whole awards are economically equivalent to what was forfeited at the prior employer; detailed termination terms and other relevant information to allow investors to assess the award; and the portion of awards that are attributable to inducement awards versus those that are strictly make-whole awards.

ISS recommends companies provide clear disclosure in the proxy statement related to a modifier metric's mechanics, including its applicable goals, the achieved performance level, and impact on payouts. The disclosure should also describe the limitations that a modifier metric has on payouts (i.e., "may increase or decrease the total bonus payout by up to 15%").

Burn rates, also known as run rates, measure the annual usage of shares by company equity incentive plans. ISS’ new Value-Adjusted Burn Rate (VABR) was announced in the 2022 policy updates, subject to a one-year transition. Now that the transition period has expired, the new burn rate calculation methodology will be effective for meetings on or after February 1, 2023. The annual VABR calculation is as follows:

In addition to the change to the burn rate calculation which resulted in the VABR, ISS has also changed the way it calculates its burn rate benchmarks used to compare individual company share usage.

ISS notes that benchmarks will only be adjusted marginally each year, if at all. GICS industry benchmarks can be found below: 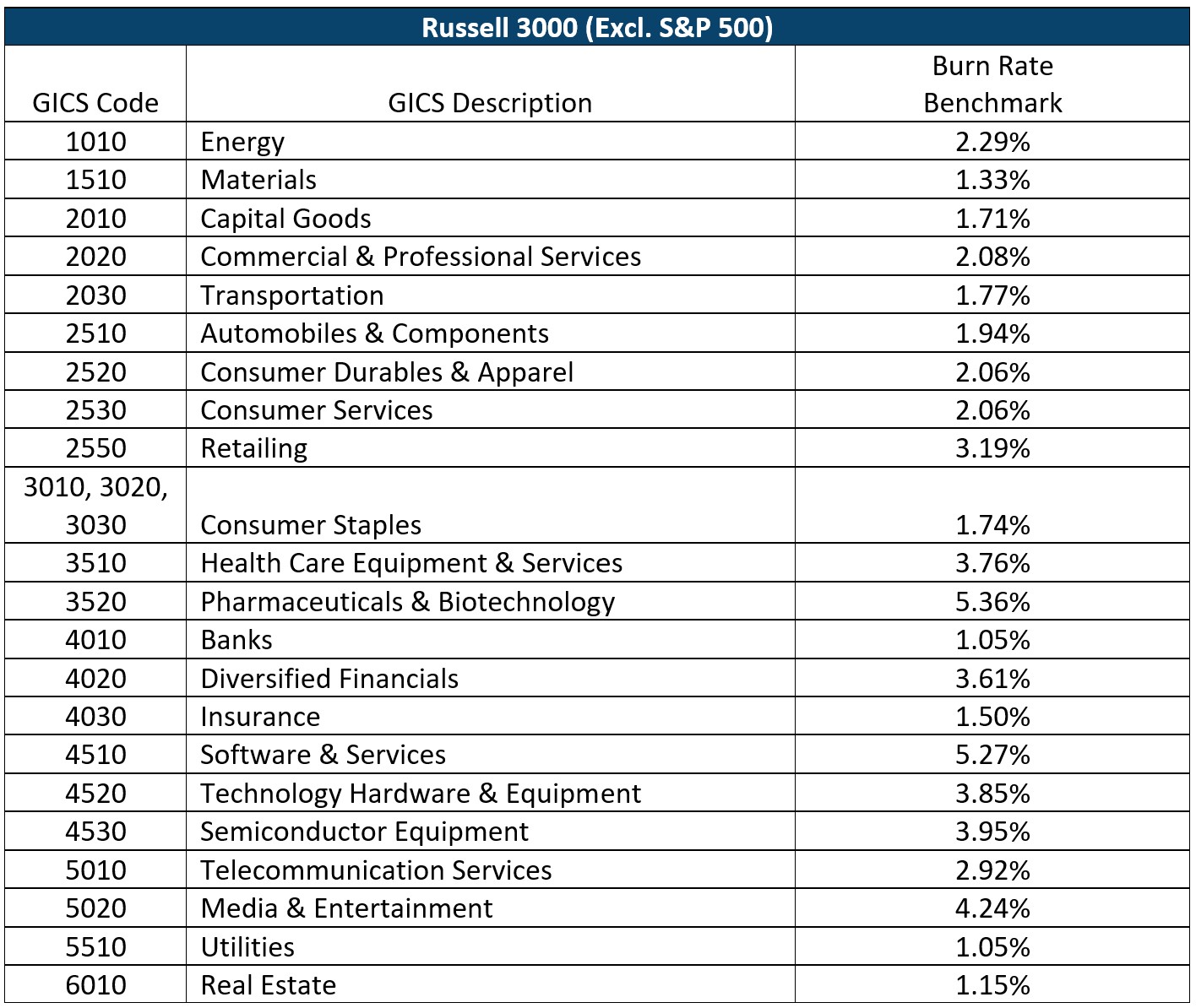 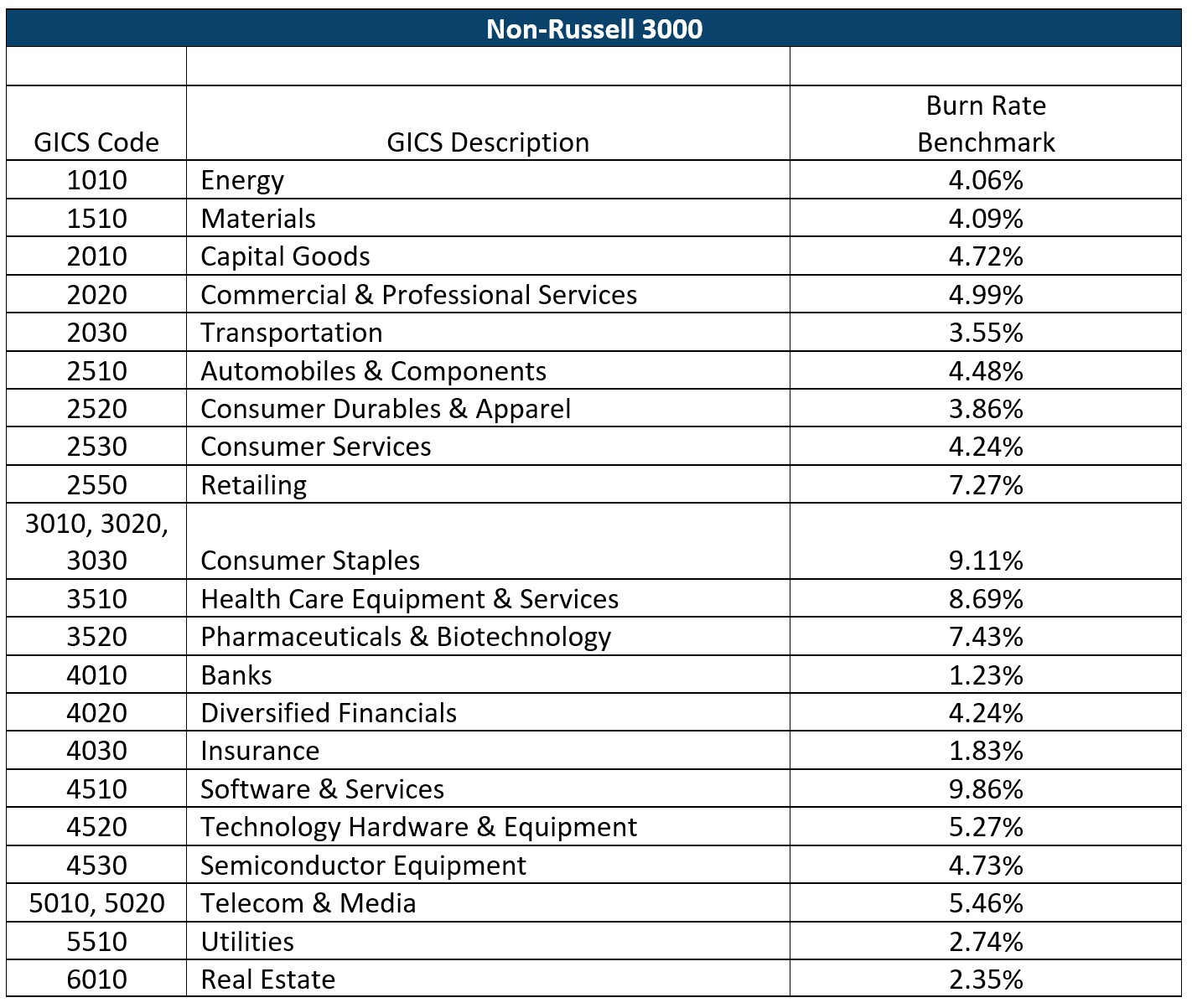 In order to receive EPSC points for the clawback policy factor, the policy should authorize recovery upon a financial restatement and cover all or most equity-based compensation for all NEOs (including both time- and performance vesting equity awards). Note that a clawback policy that adheres to the minimum requirements of the SEC’s finalized clawback rules under Dodd-Frank will not receive EPSC points, because the final rules generally exempt time-vesting equity from compensation that must be covered by the policy.

ISS added one update to its Peer Group Selection FAQ clarifying that it would expect any updated list of peer companies submitted to ISS to match the benchmarking peers that are disclosed in the upcoming proxy.

If the peers submitted to ISS through this process are different from the peers disclosed in the upcoming proxy, ISS may apply additional scrutiny to this variance as part of its pay-for-performance analysis. If there is a significant unexplained discrepancy between submitted peers and those disclosed in the proxy, ISS may in its discretion remove a company from a future peer submission process.

ISS also encouraged issuers to disclose in the proxy the stock ticker for each peer alongside the peer company name to provide for greater certainty that ISS and investors are considering the correct peers.

Joe Sorrentino has over 20 years of executive compensation consulting experience. His client assignments have been with both public and privately-held companies in industries including: chemicals, consumer products, financial services, health care, manufacturing, pharmaceuticals, real estate/REITS and utilities. His consulting engagements often focus on the development of executive compensation strategy, design of annual and long-term incentive programs, and ISS equity plan modeling, compensation and governance policies.