Similar to prior years, Institutional Shareholder Services (ISS) issued “Against” vote recommendations on approximately 11% of the Say-on-Pay proposals.

As reflected above, we currently have ISS vote recommendations on 1,744 Russell 3000 companies but only 1,618 Say-on-Pay actual vote results.

Approximately 7% of the companies that received “Against” vote recommendations from ISS failed their Say-on-Pay vote.

Overall, the average Say-on-Pay voting trend has been remarkably stable over the past several years. As reflected in the graph below, an “Against” vote recommendation by ISS negatively influenced Say-on-Pay support by 20% to 30% and the 2017 YTD experience falls within this range, albeit at the lower end (21% differential). The next question is whether a fair number of the companies that have an ISS recommendation against Say-on-Pay know that their specific shareholder base is less influenced by ISS and make different decisions as a result. It will be interesting to see how the year progresses. 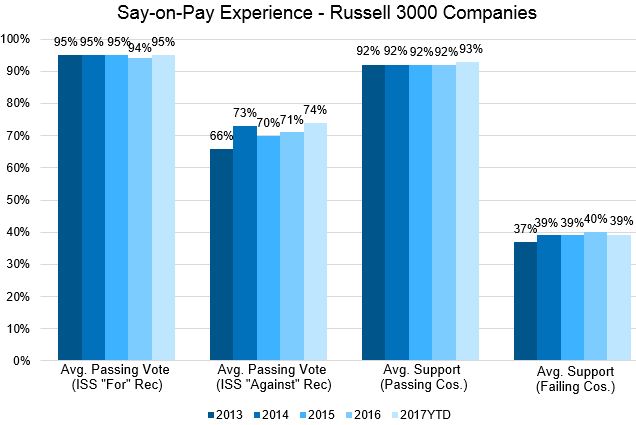 Bindu Culas and Samantha Nussbaum are former practicing lawyers who moved over to the consulting side of executive compensation several years ago.  This is our first official blog post, as we launch a new initiative to keep our clients, colleagues, fellow practitioners, and others interested in this area up-to-date on market trends, regulatory developments, and the like.  We welcome any and all feedback.  Thank you for reading.  We look forward to hearing your thoughts!

Bindu Culas has over 15 years of experience advising clients on the US and international legal, tax and regulatory aspects of designing and structuring equity incentive programs, employment agreement, and severance and change-of control plans. Bindu has worked with both domestic and foreign publicly traded and privately held companies as well as pre-IPO companies.

Samantha Nussbaum has consulted on behalf of public and private companies, compensation committees, and senior management on all aspects of executive compensation. Samantha’s consulting and legal background includes advising on executive compensation in the context of mergers and acquisitions, spin-offs, and initial public offerings; executive employment, severance, and change in control agreements; equity incentive plans; deferred compensation; and securities laws, including reporting and disclosure implications.