This blog follows up on our recent alert (the “Alert”) summarizing the new SEC rule generally requiring that a pay versus performance (PVP) table be added to proxy statements for fiscal years ending after December 15, 2022.1  It presents a table constructed by Infinite Equity2 (with input from us) that may be of some interest to companies that issue long-term equity awards where the performance metric is relative total shareholder return (rTSR).  Companies often estimate the value of “in-flight” awards (awards partway through the performance period) by using the "Intrinsic Value method,” which estimates value by determining a payout percentage based on the current percentile ranking and then multiplying that payout by the current stock price.

Here’s the table prepared by Infinite Equity.  Exactly how it works is going to require a little explanation, but it makes sense to show the table at the outset. 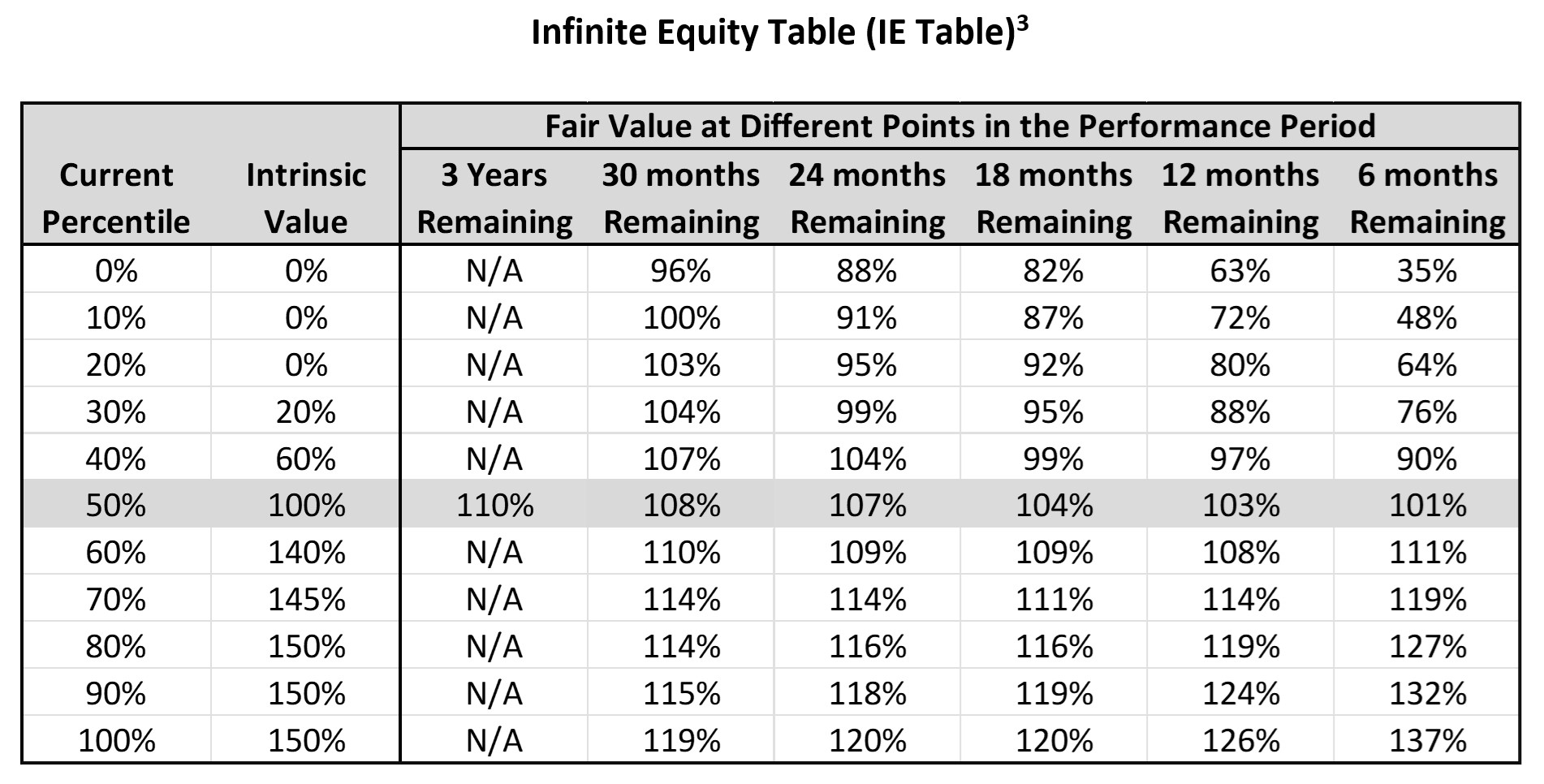 The Intrinsic Value method is quite different than the Fair Value method, which latter method generally requires a Monte Carlo simulation.  The Fair Value method computes the value by running thousands of computations simulating different price and total shareholder return paths that might be taken by the company’ stock and the peer group stocks, and then computing a value for the equity award by averaging the results.   One can debate the perceived accuracy/wisdom of Monte Carlo valuations, but this type of valuation is required for rTSR awards in the new PVP table.

As explained in the Alert, the most complex aspect of the new PVP table will be new and complex calculations involving equity awards.  For the 2023 proxy statement, the PVP table will compute something called Compensation Actually Paid (CAP) for the principal executive officer (PEO) individually and for the other NEOs as a group.  The CAP values will generally be computed for 2020, 2021, and 2022.  The CAP value is computed by starting with the Summary Compensation Table (SCT) value for total compensation, subtracting the values in the SCT for stock and option awards, and adding new equity values.4

For a particular year the new equity number for the PEO (the NEO computations are done the same way) computes the value of the PEO’s equity awards at the start of the year (which is equal to $0 if issued during the year) and compares them to the value at the end of the year or, if earlier, the date when the award is vested or forfeited.  For example, suppose the company grants rTSR equity awards each March 1 that cliff vest at the end of three years based on the relative performance of the company against a peer group.  In this case, you would need the following computations:5

The new PVP table now requires 12 in-flight valuations.  For example, let’s take the 12/31/19 computation and assume we are looking at the rTSR awards issued 3/1/18.  Maybe 1,000 RSUs were issued when the stock price was $80, and the stock price is now $100.  Finally, assume rTSR is tracking at the 30th percentile, which would indicate a 60% payout.  What is the current value of the award?

As previously indicated, based on our experience, we think most companies estimate using the Intrinsic Value method, which estimates the value as $60,000.  They would get this number by multiplying 1,000 RSUs times a 60% payout factor times $100.

The IE Table also shows how values may be overestimated in the case of a company with a high current rTSR ranking.  For example, if the company were tracking at the 70th percentile, the Intrinsic Value method yields a payout factor of 140%.  If there were 18 months left in the award, the estimated Fair Value (from the IE Table) would be 111%, or about 20% less.

There are a number of assumptions built into the construction of this table, all of which should be noted:

As companies develop estimates for CAP for their 2023 proxy statements, we believe that a table like this can be a reasonable placeholder for estimated Fair Values (at least until the end of the year when a final Monte Carlo simulation to determine Fair Value will be required).   Although the table reflects a specific set of assumptions, so that results may diverge for some plan designs, we think it is still a useful tool for companies that would like to develop insight into their 2023 PVP table and have not yet started full valuations.7   The table may be particularly helpful in cases where current percentile rankings are extremely high or low and there is significant time for the awards to run since this is where the divergence between Intrinsic Value and Fair Value is the greatest.

1 See “SEC Finalizes Pay Versus Performance (PVP) Rule, Requiring Complex Calculations for 2023.” This blog assumes some familiarity with the SEC rule, as summarized in the Alert.

2 Infinite Equity is a firm specializing in valuation of equity awards and related issues. https://infiniteequity.com/

3 Assumes 40% stock price volatility, 20 performance peers, and correlation coefficient of 0.5 between the subject company and its peers.

4 Additional changes are required if the company maintains a pension plan.  As described in the Alert, there may also be a need to take into account dividends paid on the equity if they are currently distributed to the executive.

5 Of course, you will need the value of these equity awards on their vesting dates, but since the company will already need to compute the value of the awards at this point for purposes of the Option Exercises and Stock Vested Table, this computation introduces no additional complexity.

7 FW Cook does not perform the type of Monte Carlo valuations described in this blog.  Based on conversations with Infinite Equity, our understanding is that computation of the 12 valuations necessary for a company with three outstanding rTSR RSU cycles, depending on a number of factors, can cost somewhere in the range of $20,000 to $50,000.

Dave Gordon’s practice as an executive compensation consultant covers a variety of industries, including extensive experience with financial institutions and utilities. Based on his years of experience as an executive compensation lawyer, he acts as the senior resource on numerous technical issues for the Firm. He frequently acts as an expert witness.

Ken Sparling’s assignments have been with both public and privately-held companies in various industries. His consulting engagements focus on all aspects of executive and board compensation including annual and long-term incentive programs, employment agreements and change-in-control arrangements.

Andrew Lash works with public and private companies across a variety of industries, consulting on executive and non-employee director pay practices and compensation program considerations in general.